Ellyn and I went to Noi’s Little Thai Takeout in Los Osos and then had a picnic. You can see Morro Rock in the background. 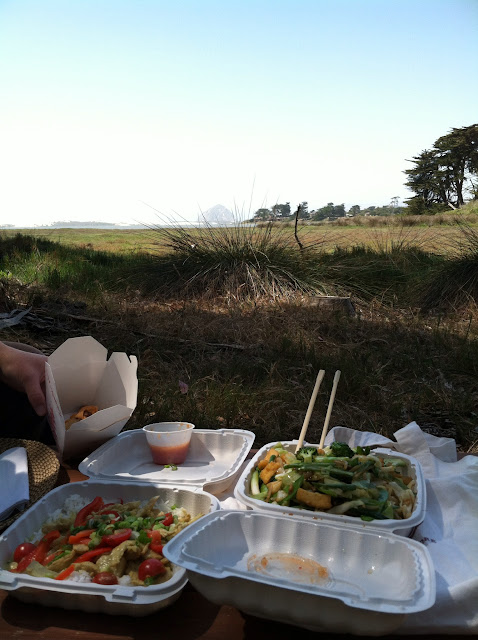 After a fair amount of frustration, I’m thinking of moving from typo to wordpress.  I just don’t need to maintain a blog engine when there are perfectly functional ones available.

After much planning and many delays, our retainig wall is finally finished (round one).  When all was said and done, it was just 11 days of work.  Of course there was a little rain in the mix, too (and we’re not counting those days).

Our contractor was absolutely fabulous.  We’ll be bringing him back in a week or so to do round 2 (garden wall along the left fence & the fence), and then again in a couple of months to do round 3 (vegetable beds & steps in front of the retaining wall.

From left to right, the pictures (more or less) are from the kitchen step, 2 of the back, then one from the back door.  Then there are a couple from the right of the car port and a few bonus shots.  Missing columns are shots I didn’t take that day.

We went to Montaña De Oro last weekend to spot whales from the coast.  We didn’t see whales, but we did get to see some seals:

Which isn’t to say that we didn’t have a spectacular time – we did.  It was ridiculously nice out; things felt more like April than January.

Today there are actually a few clouds in the sky, and they say it might even rain, tomorrow.  Feels a bit more like .. winter? than late spring.  More water would be good – though we just received a note from the city saying that we already have plenty of water supplied for the coming year.

It’s January 16th.  We have all the windows open, and have had many of the doors open on and off throughout the day.  It’s about 7pm – the sun went down nearly 2 hours ago.  It is 72 degrees.

I don’t know how long it will last, but it sure is nice while it’s here.  On the other hand, we could really use a lot more rain – but there will be plenty of time for that; it’s only January, after all.

She’s been there for months, now. Seemed to take a little holiday when it got really rainy. I suspect she went off somewhere to lay a batch of eggs. We let her stay there in the upper left corner of the doorway – though she tried to go all the way across, once. Had to break the right side of the web off – with apologies. She has not tried to expand that way again.

It has been an unusually busy summer.  There have been many visits – both with us going places and with people stopping by on the way through.

I gave notice at PGP early this year.  During the ensuing job search, they announced they would be purchased by Symantec.  I was convinced to stick around until the purchase date (June 7th).  In the meantime I made a couple of trips up to the bay area to help wrap things up.  We were lucky to find a consultant to take the baton long enough for my project to be completely decommissioned (which should happen in the next couple of months.

In the meantime, I found a job at PipelineDeals.  It’s an awesome little (just 6 of us) "startup" (4 years old!).  We’re based out of Pennsylvania, so I went out there for a couple of weeks to get to know everyone.  It was a good trip, and I got to do a little site seeing in Philadelphia.  Since then, we have opened an office in Seattle – so toward the end of the summer I visited Seattle!  Got to do some good site seeing, there, too.  And visited my sister up in Leavenworth.  I was lucky and had good weather for both trips.

PipelineDeals has been great to work for.  Great group of guys.  Great software base.  I’m coding in Ruby on Rails, which I really enjoy.

We’ve caught a couple of classic movies I’d never seen at the Fremont SLO Rewind: ‘The Odd Couple’, ‘Creature from the Black Lagoon in 3D’.  Lots of fun to see ’em on the big screen.

In August we spent a few days in San Antonio, where Ellyn attended a conference.  Remind me not to go to San Antonio in August.  Yeah, it was hot.  And humid.  And the Alamo — just not all that impressive.  The following weekend we attended a 3 day wedding event in a valley east of Sacramento.  It was great to hang out at the river and just relax for a few days.  And the following week we spent with friends at the UCSB Family Vacation Center.  Which amounts to hanging out with friends at the dorms for the week.  It’s a pretty good time.

Oh, and we’ve adopted an outdoor cat.  I call her "puss puss"; Ellyn calls her Gracie.  The vet says she’s about 3 years old.

We went hiking the local San Luis Obispo hills – more or less in the center of town – with Rene, Charly, and Rena (the dog). The first 3 shots are duplicates from 3/14.

We went driving around Santa Margarita Lake, looking for wildflowers.

Having been to half a dozen European capitals, Ellyn and I decided it was time to visit our own!

We departed mid-day from LAX. Car, Plane, Bus, Metro, There!  We stayed at a condo right at the Ballston Metro Station. We got settled in at about 10pm, east coast time.

Took the Metro to the Washington Monument

Walked to the Vietnam Memorial, which Ellyn found very moving. I certainly appreciated it – we both think it is very well done.

The Lincoln Memorial was pretty great. Ellyn found it much more moving than she thought she would – and so did I.

The FDR Memorial was nice and outdoorsy. We didn’t really plan on visiting it, but we’re really glad we happened through. It was a really nice break from the other monuments – it felt a lot less formal.

The Jefferson Memorial is big and impressive. He was an impressive guy.

We stopped by the National Museum of Natural History just briefly. It wasn’t so much our thing – if you have kids, you have to go. If not – eh.

And finally we visited the Corcoran Gallery of Art. I suppose my favorite was Renoir’s "The Blue Lady". I also like the portrait of George Washington.

Friday: quick visit to the capitol, then drive to Pittsburg

Union Station was not as interesting as we’d hoped. Kind of like a mall attached to a train station. It’s a nice mall, but still.

The Capitol is very impressive. As an American, it is somewhat disappointing to me that I have better access to the Bundestag than our capital, but I guess that’s largely an advantage granted by late 20th century architecture.

In the evening we left to Drive to Pittsburg. Of course that’s when it started to snow.

Mike and Angela live on Squirrel Hill. We visited with them for the day and went to the Phipps Conservatory and Botanical Gardens. The host was very excited about the bird of paradise that was blooming. When we landed at LAX, there were basically fields of ’em. We thought that was funny.

In the evening we drove back to DC.

National Gallery of Art. I was really taken with some of Toulouse-Lautrec’s oil on cardboard paintings.

The National Air and Space Museum was way cooler than I imagined it would be. I especially enjoyed the Wright Flyer and history. Seeing the Gemini IV and Apollo 11 Command Module in person gives you a real appreciation for why they were called ‘tin cans’. Not a whole lot of elbow room.

Monday: History (and in the making), Art visit

Started off at the National Archives Building, where we saw the original copies of the Declaration of Independence, the Constitution, and the Bill of Rights. Also on display was a 13th century copy of the Magna Carta.

After that was a visit to the Supreme Court, where we got to sit in on them talking about Enron!  The question at hand seem to be the services fraud charge and jury selection for the case. We heard from about page 50 of http://www.supremecourtus.gov/oral_arguments/argument_transcripts/08-1394.pdf.

Then we headed over to the National Gallery of Art (East Building), which was just about to close for the day.

On our last day, we decided to visit some of the museums we had not yet visited, or had just visited briefly. Ellyn really enjoyed the Hirshhorn Museum and Sculpture Garden.

We returned to the National Gallery of Art (East Building), where I mostly sat and admired Monet’s Woman with a parasol and Garden At Vetheuil.

Back in January – the 20th (our 17th anniversary, actually), I went to Morro Bay to see if there were big waves.  It was when we were having our big winter storm.

When it’s really cold, and the wind is blowing really hard in your face from the ocean, and it looks like this:

It’s time to look for cover.  2 minutes later, I was drenched from driving rain and sleet.